We study both the plants and blood plasma and cells to discover
the properties of the herbs and their actions on the body.

Whether using Asian, North or South American herbs, we use only top quality plants that are sustainably grown and ethically harvested.

We are in the process of creating a laboratory for processing herbs to be used in medicine and super foods.

We approach our work with respect and reverence for the plant kingdom. We seek no patents or excessive profits, simply harmony for all life.

Every society has to deal with health issues, starting from pregnancy, gestation, and birth and proceeding through childhood diseases, accidents and injuries, sickness, infirmity, and ultimately death. Traditionally, reliance on Nature has been the cornerstone of medicine. Among the indigenous cultures, understanding of Nature and the ability to communicate with plants — as well as animals — has been better preserved than in modern society.  However, we are at great risk of losing our connection to Nature along with the wisdom that has been meticulously preserved over countless generations.

Over the next years, we will be updating this site and developing databases, but to give an idea of what is possible, a small introduction to sangre de grado is presented. The medicine is made from the sap of the tree and is a dark brownish red color but becomes nearly transparent when it dries after applying to the skin. Because of the color, the name refers to blood, but, in this case, dragon’s blood. The sap not only stops bleeding but it relieves pain and the risk of scarring. In short, it is a total medicine for cuts as well as internal hemorrhaging.

Speaking for myself, I would not be writing this today had I not taken some drops when suffering a massive nosebleed following exposure to radiation from Fukushima. It took only a few drops, internally, to arrest the bleeding.

Though modern medicine has styptics and clamps as well as cauterization methods, this precious sap is much more systemic in action and therefore fascinating.  It is important to preserve knowledge of the proper use of the sap.

So, as part of the work of the Institute, we will study the myriad of chemicals as well as traditional uses of sangre de grado and do our part to assure that the habitats of the trees are protected.

The images below show a section of the Croton lechleri tree, the cutting of the tree to get the sap needed for a patient, and the application of the sap to a toe. The tree grows in the upper Amazonian regions of Colombia, Ecuador, and Peru. The tree is called sangre de grado in Peru and sangre de drago in Ecuador.

Like most plants, it has a complex chemistry but most pharmacological actions are attributed to taspine, an alkaloid, and dimethylcedrusine, a lignan. Sangre de grado is a potent antioxidant and has strong antiviral actions. It is antitumorous, especially for sarcomas. 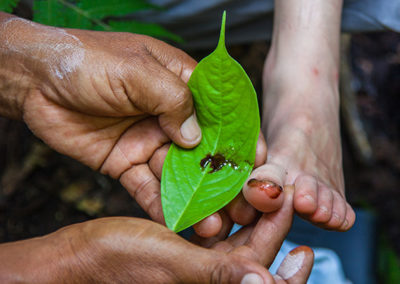 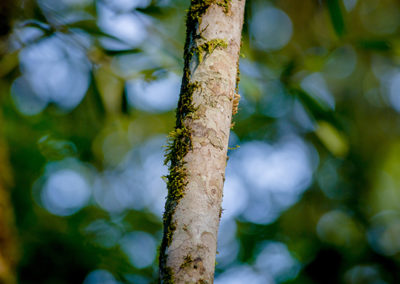 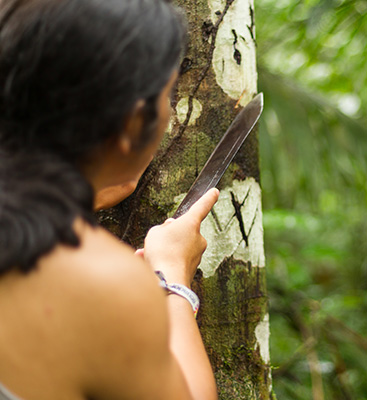 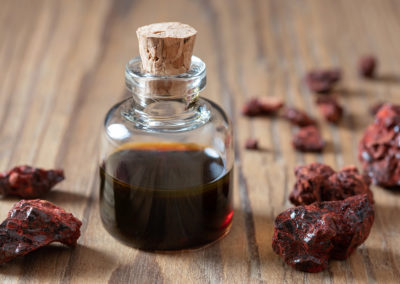 After the nuclear crisis in Fukushima, some parts of the world, including the Pacific Northwest where I live, were subjected to considerable fallout. One day, I felt my blouse was getting wet. I looked down and was covered with blood. The sight in the mirror was shocking. My first thought was, “This is an easy way to die. It is painless and quick.” Then, I remembered sangre de grado, I took some immediately and the bleeding stopped. It was not a trickle. It was a full hemorrhage.

One of my formulas that helps to rebuild blood is Goji Tonic so I mixed some sangre de grado with the Goji Tonic and took it daily until I felt certain that I was stabilized. Obviously, with such an enormous blood loss, I was weak. The tonic is strengthening. Over the next months, there were four more hemorrhages, one as bad as the first one. There have also been minor ones from time to time, but each one was immediately arrested with my concoction.  This is a simple example of how a traditional remedy can be combined with other herbs to form a comprehensive response to needs.

While consulting in Germany, I was invited by the surgeon to observe an operation. The assistants teased me afterwards and suggested I had never seen an operation before. I said that the shock they had observed was due to seeing how primitive the methods were. The doctor asked what suggestions I had. Top on the list was to control the bleeding with sangre de grado instead of using sponges. The next day, there was another breast cancer operation .  This time, I moved my hand just slightly behind the surgeon’s hand to drip sangre de grado directly into the incision line. We had two drops of blood to mop up; but, more importantly, the patient came out of anesthesia without a trace of pain. She also reported many visions she had while “unconscious” and these appeared to include members of the surgery team as well as herself in past lives.