Some of the pages on this site are wordy.  The purpose is to show the depth and level of commitment of the people and projects.  Where herbal formulations are concerned, my work gestated for many years before I began research on a book about botanical cancer treatments. At the time, the Internet was not the resource it is today so I relied on books, including some interlibrary loans of very old treatises. 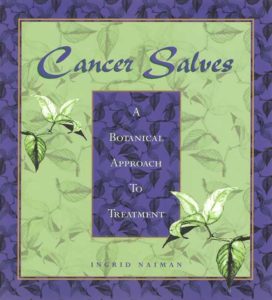 Because the book was in part multicultural, I kept a map of the world and every time an anticancer herb was mentioned, I entered it on the map.  The reality is that several thousand herbs have anticancer properties, but as I read about each, the same herbs were often used in a variety of situations ranging from high blood sugar to blindness.  Many were antifungal, antiviral, antiparasitic, and so on and so forth, all in addition to being antitumoral.

When the book was in a small prepublication edition, I spoke at the American Herbalist Guild conference in Cincinnati and visited the Lloyd Library and Museum. An incredible herbalist suggested we re-create some of the formulas I had found to see what they were like.  Neither of us had any intention of starting a business.  We were simply curious, but the first authentic batch of Compound Syrup Scrophularia resulted in the almost immediate resolution of a tumor on the clavicle that was the size of a nectarine.  The patient was the mother of someone I knew quite well, and the formula was bequeathed by Dr. Eli G. Jones, a famous Eclectic physician who treated thousands of patients.  Today, we produce this under the name of Seneca Elixir, and it is one of about 265 herbal products in my Sacred Medicine Sanctuary line.

What is unique about the product line is that initially nothing was produced “for the market” but rather on the basis of history and tradition.  Then, almost every product was tested in real clinical settings, often using darkfield microscopy so that the action of the herb in the plasma and blood components was very carefully observed.

One of the many challenges with herbal medicines is that bulk herbs can usually be shipped under the same rules and regulations as agricultural produce, but the moment the herbs are processed, they fall into another category.  In most South Americam countries, each formula has to be registered in each country so the challenge of operating a clinic that has all the necessary herbs and formulas is actually quite enormous.  Obviously, we can blend herbs ourselves, but if we market them, that is another story.  In short, the commitment to explore traditional medicines from the various cultures of Central America, the Caribbean, the Amazon, and the Andes is just a starting point.  Each herb has to be studied in a clinical setting and tested again and again so that its pharmacology and actions are properly understood.

If we are to take responsibility for the issues faced by millions of people globally, we have to make the successful formulas available and explain their uses.  Take any “invisible epidemic” and ask how it feels to be autistic or to be the parent of an autistic child, how does it feel to have Lyme disease and many co-infections.  How does it feel to go from doctor to doctor with a litany of complaints only be labeled a hypochondriac when in actuality there is an undiagnosed mold infection.  What about being told that one’s nosebleeds are nothing to be concerned about when in actuality, they may be related to radiation.

These are the conditions we will be addressing.  Kitzia will be in charge of finding the herbs, growing them, knowing when and how to harvest them, and I will be overseeing the clinical testing and ultimate formulations.

I started many years ago with one formula that we could say was Native American, i.e. ethnobotanical, in nature.  Now, my product line has about 265 extracts, blends, teas, ointments, and essential oils.  They include about 70 Ayurvedic herbs and formulas as well as many Chinese and rainforest herbs.  Some are historic re-creations and some are my own formulations, usually created in response to the specific need of a particular patient.  In short, they are not academic or theoretical but grounded in the realities of clinical tests and patient feedback.

It is very important that the knowledge I have is kept alive.  It took me many decades to acquire the broad understanding I now have.  The healing traditions need to be carried on by and for the next generations.  Most importantly, the understanding of the herbs and their availability have to be protected for posterity